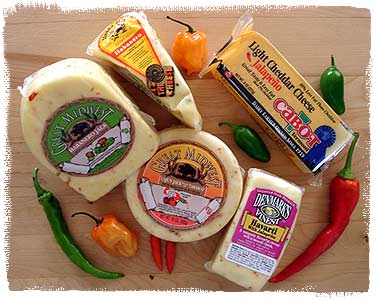 Harald Zoschke and I teamed up to write this article! “On October 16, 2001, New York-based artist Cosimo Cavallaro dramatically demonstrated his love for chile cheese by covering a house in Powell, Wyoming, inside and out with 12,726 pounds of melted Pepper Jack. The “painting” of  the house was part of the town’s “Cheesefest” celebration, which featured a parade and the election of a cheese king and queen. The “fishbait” cheese was outdated and was purchased from Marathon Cheese Corporation in Marathon, Wisconsin., for five cents a pound. The cheese then was melted and pumped through a hose manned by the artist. Cavallaro explained his interest in cheese this way: “It’s milk. It’s life.” The house had been scheduled for demolition, but for a while it shined as a culinary creation–the world’s largest inedible nacho.” Read the entire cheesy article here. 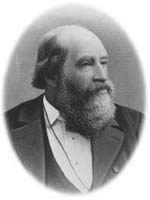 David Jacks — The famous cheese maker who
gave his name to Monterey Jack and Pepper Jack.