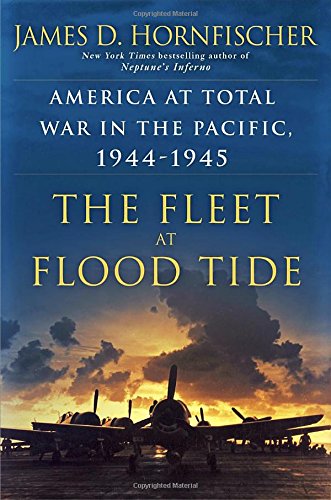 The subtitle of this fine narrative history is apt: “America at Total War in the Pacific, 1944-1945.” This title was released four days ago and I’ve already read all 602 pages. Yes, it’s military history, and naval history in particular, so you might wonder why a food historian and cookbook author reads it. It is possibly a glimpse into a future that never happened to me. In 1961, my father, a former Navy Lieutenant Commander working for the Department of Defense in ELINT, wanted me to go to the Naval Academy, so my mom, who was a Republican committeewoman, leaned on Rep. Joel T. Broyhill to appoint her son. He appointed me, all right, but to the Air Force Academy. I had already fallen in love with the University of Virginia, so I made a deal with dad. I would enroll in the Navy NROTC program at UVa. I lasted three semesters before realizing that the military was not my calling. However, I was number one in my class in Naval Science. Hence my quick read of this book.
This gung-ho account of the end of the War of the Pacific has real characters, occasional dialogue, and a plot with omniscient narration, so it’s a tense and emotional read. If you were Paul Tibbets, who piloted the Enola Gay B-29 that dropped the A-Bomb “Little Boy” on Hiroshima, how would you feel about killing 100,000 civilians? President Truman wondered too. “What do you think?” he asked Tibbets. “Mr. President,” he replied, “I think I did what I was told.” The president slapped his hand on the table. “You’re damn right you did, and I’m the guy who sent you. If anybody gives you a hard time about it, refer them to me.”
Divided into four parts, Sea, Land, Air, and Earth, author James D. Hornfischer focuses on the high points of military and political strategy that sealed the victory for the Allies in the Pacific, sometimes in gritty and gory detail. Meticulously researched but not academic, this book is my favorite read of 2016–so far. More about it here.