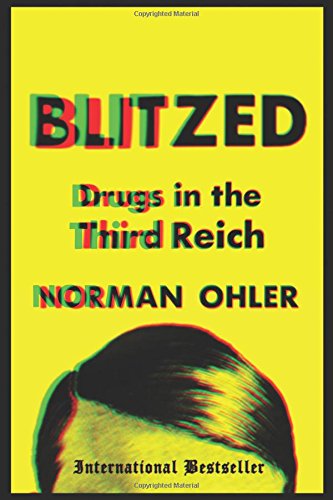 In the pre-war Berlin of 1938, German housewives were urged to “make housework more fun” by eating Hildebrand chocolates. These fancy boxed chocolates gave the ladies a boost because each individually wrapped chocolate contained 14 milligrams of methamphetamine, living up to their slogan, “Hildebrand chocolates always delight.” The chocolates were part of the campaign by the drug company Temmler Works to create, like the Volkswagen, a Volksdrogen, or peoples’ drug: Pervitin, that was advertised much in the same manner that aspirin was, despite the fact that the drug was pure crystal meth. After Hitler started World War Two, the German armed forces, needing drugs to help their blitzkrieg, fast-moving tactics that did not allow for much sleeping by the troops, adopted Pervitin with vengeance. In 1940, Temmler works received an order from the army and Luftwaffe for 35 million doses of Pervitin!
This book is astounding. Most armchair historians of WW 2 knew that there were a lot of drugs floating around Germany, but the author of Blitzed,  Norman Ohler, has written a blockbuster of an expose that makes us review why German lost the Battle of Britain, cancelled Operation Sea Lion, the invasion of England, and badly lost to the Russians. Because not only was the military seriously on drugs, but so were their leaders. Adolph Hitler was by far the worst because he was the Führer on speedballs–special concoctions of heroin, cocaine, and crystal meth. Hitler went from teetotaler to junkie teetotaler because the only drug he didn’t use was alcohol. His personal physician, Dr. Theodore Morrell, in order to comply with Hitler’s direct orders to alleviate all his aches and pains, shot him up daily, starting with Pervitin, then adding oxycodone (called heroin, it was the supposed cure for morphine addiction), and finally cocaine. No wonder Hitler had convulsions all the time.
On his last day on earth, he married Eva Braun. Ohler writes, “After the ghostly wedding ceremony spaghetti was served, with tomato sauce on the side, hydrogen cyanide for dessert, and a bullet in the brain from a 6.35 mm Walther.”
This book is shocking and is highly recommended.