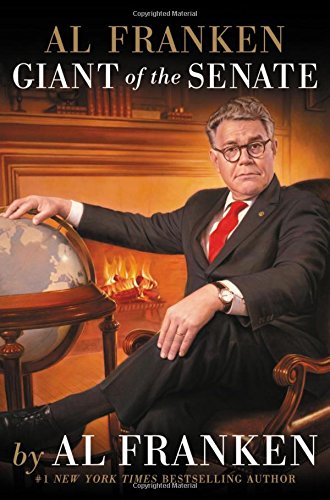 First, a question: Why Did Al Franken Write This Book? Because…
–He’s had two New York Times No. 1 bestselling books and wanted another. (And he might get it–the book is No. 3 on the nonfiction list in the Times today.)
–He wanted to publish parts of his autobiography before some biographer did it.
–He’s promoting himself for a 2020 presidential run for the Democrats.
–He needs the money. Or just wants it.
–All of the above.
Readers will have to come to their own conclusions because I’m not sure. Take a close look at the cover. It is deliberately pompous, like he’s bringing back FDR’s “Fireside Chats” with the fire in the background and Al’s fingers on a globe at right where the Arctic Circle begins. Franken has this bemused look on his face like he’s about to stick his tongue out at you.
Yes, the book is a memoir that tells the unlikely story of a comedian and actor who spent most of his career ridiculing everything he could, then decided to run for the Senate in Minnesota and won by 312 votes out of 2.9 million cast. That’s remarkable in itself, but Franken goes on to report how much this changed his life–so far. And the most interesting part of all that was his attempts–and those of his staff–to de-humorize his personality. By avoiding jokes and quick one-liners, he was trying to prove to voters that he was serious about his candidacy and had given up his previous humorous personality. And then his opposition went back in time and revealed his most crude Saturday Night Live sketches in order to sink his campaign. It didn’t work.
The first half of this book is pretty funny, and I was chuckling about every other page. But after the campaign is over and Franken is a senator, the book is less funny and not nearly as interesting–including a boring, 20-page chapter entitled “Health Care: What Now?” So, in conclusion, the book is…okay. I know that’s not a very strong endorsement of it, but if the book were funnier, it might not have seemed so self-serving. I gave it three stars on Amazon.