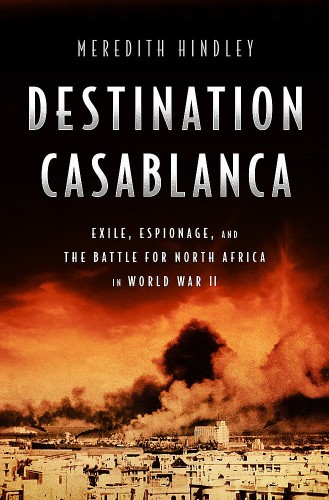 A review of Destination Casablanca: Exile, Espionage, and the Battle for North Africa in World War II, by Meredith Hindley

This history of the Allies’ invasion of North Africa has three parts: the background, the battles, and the aftermath. You will need to exercise a bit of patience when you read the background of the story because it seems to take forever for the Allies—meaning the U.S. and Great Britain in this case—to decide on an invasion plan. I was confused by the chapters on Vichy France because there were too many characters in that story and the politics were murky. Were the leaders of Vichy France collaborators with the Nazis or just loyalists trying to save their country in any way possible? But when the author finally gets to the invasion and subsequent battles, this book gets really fascinating. She weaves together the military matters and the fascinating characters involved, like the superstar Josephine Baker, the Freud family in exile in Casablanca, and William Donovan, who created the OSS, progenitor of the CIA. The story of Operation Torch is particularly interesting because it was the first counterstrike against the Germans since they had blitzkrieged their way across Europe only to get mired down in Russia. Had Rommel been successful in North Africa and repelled, say, the attack on Algiers, he could have taken Egypt and the Suez Canal and the Nazis would have controlled the Mediterranean. But neither Rommel nor any other German leaders learned about the coming invasions—they were caught totally by surprise, and the Allies’ seizure of French North Africa was the key to the invasion of Italy. The aftermath of Operation Torch was not nearly as interesting as the battles until the final chapters that incorporate the mystique of Casablanca as reflected in the Humphrey Bogart movie, which was released before the actual invasions. All in all, Destination Casablanca is a well researched story that is brilliantly told.