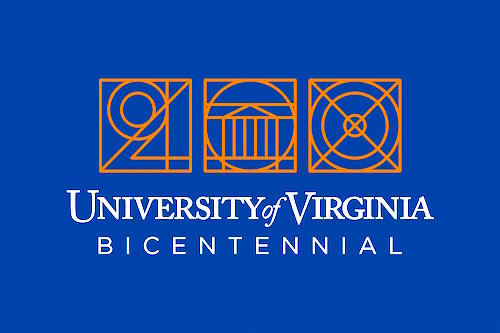 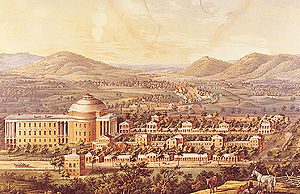 On February 14, 1816 Thomas Jefferson, James Madison, and James Monroe and others obtained a charter from the Virginia General Assembly for Central College, or the University in its chrysalis form. The group raised $40,ooo (worth $793,820 today) and bought the land where the University now sits. On January 26, 1819, the General Assembly chartered the University of Virginia. Slaves leased from nearby farmers built the University and it opened for classes on March 7, 1825. Ironically, the first African American student was enrolled 125 years later by order of a federal court. I enrolled 1n 1962 as an Echols Scholar and intended to major in Chemistry, but switched to English when I discovered how much math I would have to take. In those days, women undergraduates were only allowed in the School of Nursing, so for dates we had to travel to Mary Washington College or Radford College. Since we weren’t allowed to have cars on campus, we had to hitchhike or take the bus or train hundreds of miles to take a gal to dinner. However, during the big party weekends, Homecoming or Openings, lots of women would come to Charlottesville to have a great time. In the Fall of 1980, the number of women entering the University exceeded the number of men. Here are some random memories from my four years there.
*U.Va. had the longest losing streak in football in the country, yet I went to every home game.
*I received a “B” in Creative Writing and protested to the professor. He said I had what it took to be a professional writer, but I just needed more practice. “Write every day,” he told me. I’m still doing that today after publishing 53 books.
*I hated required courses that I knew that I would never use, like calculus. I went into the final exam with an “F” average. The exam was 50% of the final grade. I aced it and got a “C” in the course. Cramming does work with the proper motivation.
*In my sophomore year, I joined the University radio station, WUVA, and eventually became its vice president. I also worked for WCHV and worked my way through college talking on the radio. I ended up spending 12 years in the radio business.
*In those days it was a tradition to wear a coat and tie to all classes, so I did that too, and to this day I avoid wearing ties.
*I drank Virginia Gentleman bourbon.
*In 1966 I graduated with a “B” average, moved to Richmond to go to graduate school at the University of Richmond, got married to my first wife, and worked for WRVA Radio, the best station in the state.

Watch Out for Jimson Weed!