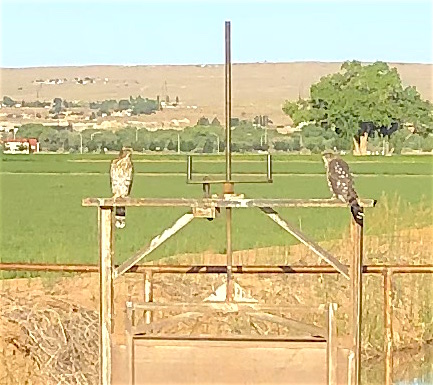 The photo above, shot in the South Valley, shows a pair of Cooper’s hawks perching on a ditch gate. Studies have shown that Albuquerque has the highest density of Copper’s hawks of any city in the the U.S. But why? Brian Millsap, national raptor coordinator for the US Fish and Wildlife Service, the position he still holds today, decided he wanted to apply his professional knowledge to obtaining his Ph.D. and has been working with NMSU’s Department of Fish, Wildlife and Conservation Ecology’s professor Gary Roemer since 2013. Focusing their research on New Mexico’s largest urban location, Albuquerque, Millsap and Roemer have been studying the ecology of a relatively new and expanding population of Cooper’s hawks. “Urban wildlife populations can be ‘sources’ or ‘sinks,’ either reproducing and surviving so well that excess individuals are produced that leave to settle in the surrounding natural areas, or doing so poorly that they need constant immigration from outside to stay viable,” Millsap said. It turns out that Copper’s hawks are sources, Millsap concluded after his research from 2011 – 2015 in a 28 square-mile area in northeast Albuquerque, where he monitored the fate of 320 Cooper’s Hawk nests, and tracked survival and movements of 331 banded hawks, 85 of which were equipped with radio transmitters. The reason is an abundance of doves. The mourning doves have been around forever, but in the last few decades, two other species have settled in Albuquerque. The first was the Eurasian collared dove and the second was the white-winged dove. “Because of the proliferation of white-winged doves, the city-dwelling hawks have an abundant year-round food source,” Millsap said. “This turns out to be extremely important, because it allows urban hawks to spend winters in Albuquerque, near their eventual breeding sites.” The hawks also prey on other common birds. Just two weeks ago, a Cooper’s hawk flew over my head carrying a freshly-killed robin. So, an abundance of prey means an abundance of predators, which is why these hawks are so common in urban Albuquerque.

From Board to Board