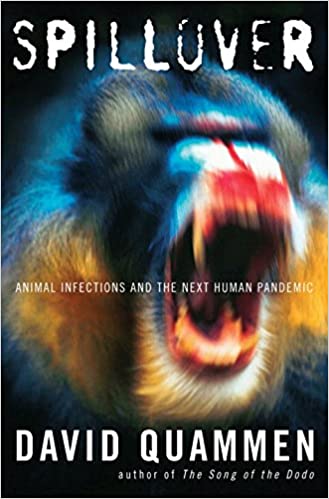 Forget Stephen King–these two books are much scarier, and they’re not fiction. And both describe diseases far worse than Covid-19. 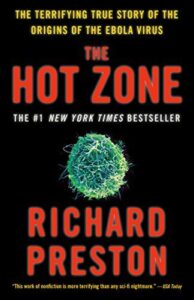 Richard Preston, the brother of novelist Douglas Preston, started this trend in 1994 with the publication of The Hot Zone: A Terrifying True Story, which concerns the origin of the Ebola virus. Stephen King wrote, “One of the most horrifying things I’ve ever read. What a remarkable piece of work.” It is that and lot more. Two years before the book was published, Preston wrote, “The earth is mounting an immune response against the human species,” and added another frightening observation, ““The more one contemplates the idea of viruses, the less they look like parasites and the more they begin to look like predators.” He also reminded us, “A hot virus from the rain forest lives within a 24-hour plane flight from every city on Earth.”  In her article, “On Reading Richard Preston’s The Hot Zone During the Covid-19 Pandemic,” published in the British Columbia Medical Journal in the September, 2020 issue, Kristina Jenei noted, ominously, “Perhaps most shocking is how unprepared some political leaders continue to be despite having a wealth of scientific and medical expertise at their disposal, failing to act decisively in the face of a global health emergency. Suffice to say that the combination of a novel infectious virus and a lethal mix of identity politics, misinformation, and fragile health systems has created the perfect storm.” It is definitely time to read or reread The Hot Zone. 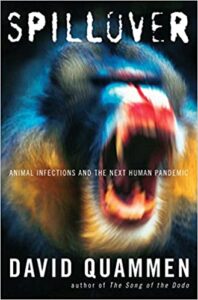 David Quammen chose to focus on zoonotic diseases, those transmitted to humans from animals, in his scary 2012 book, Spillover: Animal Infections and the Next Human Pandemic.  In his conclusion, Quammen reminds us “that we humans are inseparable from the natural world. In fact, there is no ‘natural world,’ it’s a bad and artificial phrase. There is only the world. Humankind is a part of that world, as are the ebolaviruses, as are the influenzas and the HIVs, as are Nipah and Hendra and SARS, as are chimpanzees and bats and palm civets and bar-headed geese, as is the next murderous virus–the one we haven’t yet detected.” The Booklist review of Spillover noted:”Drawing on the truly dramatic history of virology, he profiles brave and stubborn viral sleuths and recounts his own hair-raising field adventures. Along the way, Quammen explains how devilishly difficult it is to trace the origins of a zoonosis and explicates the hidden process by which pathogens spill over from their respective reservoir hosts (water fowl, mosquitoes, pigs, bats, monkeys) and infect humans. We contract Lyme disease after it’s spread by black-legged ticks and white-footed mice, not white-tailed deer as commonly believed. The SARS epidemic involves China’s wild flavor trend and the eating of civets. Quammen’s revelatory, far-reaching investigation into AIDS begins in 1908 with a bloody encounter between a hunter and a chimpanzee in Cameroon. Zoonotic diseases are now on the rise due to our increasing population, deforestation, fragmented ecosystems, and factory farming. Quammen spent six years on this vital, in-depth tour de force in the hope that knowledge will engender preparedness. An essential work.” And this book also deserves to be read or reread in these days of the pandemic.

Climate Change: The Nonbelievers, the Faithful, and the Gloom-Merchants