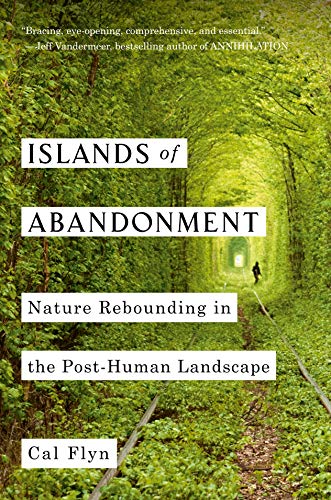 A Review of Islands of Abandonment

In this excellent book, Cal Flyn uses the word “island” in the metaphorical sense of “a thing or place resembling an island, especially in being isolated, detached, or surrounded in some way.” Her main accomplishment is a rejection of the gloom and doom attitude about the future of the environment so prevalent in the media today. Nature has an uncanny ability to survive and rebuild itself after cataclysmic events. Take nuclear destruction for example. After the hydrogen bomb test at Bikini Atoll in the Pacific in 1954, we might expect that all life in the region would have been destroyed forever. But fifty-four years later, scientists inspecting the lagoon found that “a thriving underwater ecosystem had formed in the blast crater. Nine years after that, in 2017, the crater “was even more densely embroidered with life.” The huge schools of tuna, reef sharks, and snappers were thriving “as a direct result of the lack of human disturbance.” And that’s the point of the book–the true threat to the environment is not nuclear devastation, supervolcanoes, or asteroids from outer space–it’s human beings. She writes, “Every major extinction event on the planet has been succeeded by a burst of extraordinary creativity: rapid diversification as heretofore insignificant species take on the roles left empty by those wiped out.” Mammals and birds replacing dinosaurs is the primary example of environmental recovery. Hence the subtitle of the book, “Nature Rebounding in the Post-Human Landscape.” So what about the human factor? Is it too late to reverse or cope with human-caused climate change? Well, animals are adapting; “two-thirds of species are extending their ranges north, or onto higher ground as local climates shift.” Cal Flyn observes, “I am no mystic. I have received no visitation, no annunciation. There may be no absolution. But I do know this: all is not lost.” She has inserted some positive thinking into the morass of negativity.

Climate Change: The Nonbelievers, the Faithful, and the Gloom-Merchants