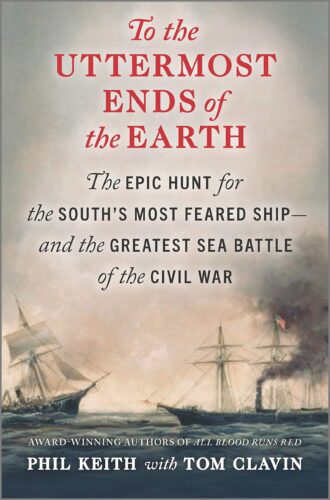 With the exception of the duel between the two ironclads USS Monitor and CSS Virginia during the Battle of Hampton Roads, I don’t know of many books featuring the Union and Confederate navies during the Civil War. And that duel ended in a boring draw, with neither ship able to significantly damage the other. This book, with the subtitle “The Epic Hunt for the South’s Most Feared Ship and the Greatest Sea Battle of the Civil War,” is a much more exciting tale because it involved two hybrid ships–part steam and part sail–that after a chase of thousands of miles, ended up fighting each other off the coast of France. The CSS Alabama was a Southern raider that attacked Union trading ships, capturing and sinking dozens of them. The USS Kearsarge was given orders by the Union secretary of the navy to: “Travel to the uttermost ends of the earth, if necessary, to find and destroy the Alabama.” Which is exactly what it did. The book, by Phil Keith with Tom Clavin, is utterly fascinating as well as being exciting despite the fact that we know the final outcome. The description of the battle itself is one of the best about naval warfare that I’ve ever read, rivaling those in the fictional Master and Commander series by Patrick O’Brian. This book is a must read for Civil War buffs and occasional military history readers alike. Highly recommended!